Locating anything underground, whether buried utilities, metal, or even water, is a complex task. While today’s utility locating involves using sophisticated technology to find and trace buried infrastructure, locating underground objects has a long history that begins well before the use of electromagnetism in the trade.

The ancient technique of using dowsing rods to find underground objects is still used by some today in utility locating. Because its effectiveness can’t be proven scientifically, dowsing is a controversial practice that should not be used in place of electromagnetic locating or ground penetrating radar. But how do people use them, and is it possible that they could work? Here’s a clue, it’s not how you think!

Dowsing, or water witching, refers to the act of using two L-shaped instruments, one held in each hand, in an attempt to discover the position of something underground. That something can range from water to underground utilities, and sometimes even extend to hidden archaeological structures.

Dowsing rods can take the form of something as simple as two bent tent poles or something that has been purpose built. Y-shaped dowsing rods are often made from the branch of a tree. L-shaped variants are most commonly made of metal.

How Dowsing Rods are Interpreted

This photo from 1942 shows a farmer using a hazel twig as a dowsing rod in an attempt to find water on his farm in England.

The origins of dowsing trace back as far as the Greeks in the mid-fifth century. Herodotus reported the use of wooden Y-shaped forks for finding water.

By the 16th century, Georgius Agricola, a German mineralogist and writer, recorded dowsing rods being used to find metal ore deposits in his book De Re Metallica. His book described the practice of dowsing as “…wizards, who also make use of rings, mirrors, and crystals, seek for veins with a divining rod
shaped like a fork: but its shape makes no difference for it is not the form of the twig that matter, but the wizard’s incantations which it would not become me to repeat.”

Often associated with the unexplained, dowsing transitioned from being regarded as a form of medieval witchcraft to a rational art form that could be learned

In the 1980s a large-scale experiment was conducted in Germany with over 500 self-proclaimed dowsing experts. A large, two story barn with a large pipe filled with water was moved back and forth on the ground floor while the dowsers occupied the second floor, tasked with determining the water’s position in the pipe below. The study’s organizers determined that the experiment proved that dowsing worked. However, when subjected to additional scrutiny the results proved the opposite. The organizers had picked out just the few dowsers that had gotten luckiest, suggesting that while they were skillful dowsers, the other participants did not make the cut. 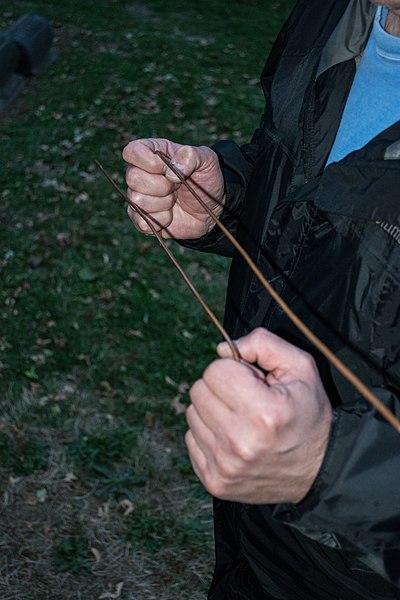 The Science Behind Dowsing

So without a large-scale study proving it works, why do so many people rely on it? It turns out, science can also reveal why so many people claim that dowsing works! More so than any metaphysical intervention, dowsing’s success can be attributed to something called the ideomotor effect.

Before we get to that, a brief foray into consciousness. At a basic level we are all aware of our conscious actions. When we want to open a door, we think through the action and complete the task.

The second category relates to performing tasks like breathing, maintaining a heartbeat and swallowing. These are “excitomotor” actions, things we do each day without thinking.

Next we have “sensorimotor” actions that relate to our innate reflex reactions. These actions are developed through trial and error. They help to build our knowledge of the world. For example, we react instinctively to pull away if we touch a hot surface.

The final unconscious element is called the ideomotor effect.

So what exactly is the ideomotor effect?

In essence, the ideomotor effect refers to actions that are unconscious and involuntary movements that occur because of prior experience, suggestions or expectations. Priming or thinking of a motion can cause muscle movements that can be used to explain how dowsing rods will move without any perceived action by the user. Facilitated communication and Ouija boards have been attributed to this phenomenon as well.

In the case of utility locating, experience and prior knowledge of infrastructure can influence a technician’s ability to determine and interpret a utility‘s underground position. Above ground visual cues, prior site visits, and any other aspects of job experience can lead to the development of a more innate understanding of where utility infrastructure may be. Without realizing it, a technician may move the dowsing rods during their search for utilities. And if they happen to be right—that is, if the dowsing rods move into the “yes” position and it is later confirmed that they were above the object being sought—that serves as proof positive of dowsing’s practical effectiveness. People have a tendency to seek information that confirms their existing beliefs. This is known as confirmation bias, and it can also be a contributing factor that leads people, inadvertently, to the right answer.

So where does this leave us? Dowsing works, but only insofar as it confirms what we already know or suspect. With no other options, it may be good enough to find water when used by someone with knowledge of the local terrain.

With utility locating, the stakes are too high. Making educated guesses with or without dowsing rods may sometimes lead to an accurate locate, but the potential for damages and loss of life means guesswork isn’t good enough. According to the Common Ground Alliance, there were 532,000 utility strikes in the US alone in 2019, with direct and indirect costs estimated at $30 billion. Failure to call 811 to request a utility locate was the highest root cause behind damages.1 With that much risk present from digging up the ground, it is important that excavators have access to at least Quality Level B data, which is provided by science-based tools such as electromagnetic locating or ground-penetrating radar. At best, using dowsing rods coupled with a site survey can lead to Quality Level C subsurface utility engineering data.2

The key to accurately finding utilities lies with a combination of infrastructure knowledge and the use of proven locating technologies. The technologies we deploy should remove, rather than reinforce, confirmation bias from the equation and base utility positions on an understanding of what the locating instrument is detecting. This approach will help minimize mismarks and allow technicians to find the target lines.

Regardless of the equipment used, understanding the different quality levels of utility data, and taking steps to ensure the best possible locate data is achieved, goes a long way in our shared responsibility to prevent underground damages.

2 See the American Society of Civil Engineers’ “Standard Guideline for the Collection and Depiction of Utility Subsurface Data.”